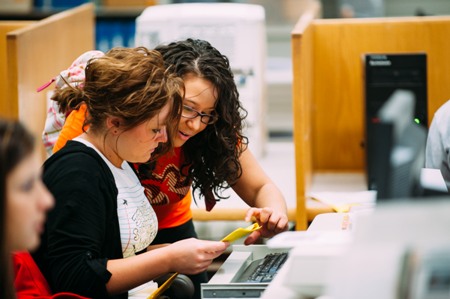 Thanks to the generosity of a Portsmouth family, the Shawnee State University Board of Trustees in October of 1997 named its library the Clark Memorial Library.  It is dedicated to Mr. and Mrs. Clyde W. Clark, long time Portsmouth residents and supporters of the University.

Mr. Clark was born in 1896. He, along with William A. Burke and James B. Miller, purchased controlling interest in the then-named Ohio Stove Company, which subsequently became OSCO Industries, Inc. Mr. Clark served the company as its chief financial officer and secretary from 1943 to 1975 and then continued on its board of directors until his death in 1975.

Mrs. Clark was also the major donor of the Clark Planetarium on the Shawnee State campus which has provided educational support for university students and astronomy programs for the community since 1998.

The Bear Cave is open 24/7 during fall and spring semesters.  It is open regular library hours during breaks and summer semester. Students, faculty, and staff can enter the Bear Cave by swiping their Bear Card.

The Bear Cave is a hybrid study space for students, faculty, and staff.  The Bear Cave features 12 computers, a printer, and power supplies to charge laptops and cell phones. The Bear Cave is sponsored by the Student Government Association.  SGA advocated for a student study space with extended hours and we are happy to meet this need.